The international scope of the Baillieu Library Print Collection has been broadened by the acquisition of three works by José Guadalupe Posada (1852-1913).

Posada is regarded by many as the founder of Mexican printmaking, bringing the medium to the masses through popular news sheets and chapbooks. He worked at the publishing house of Antonio Vanegas Arroyo, which produced thousands of periodicals and broadsides. These ephemeral printed documents communicated caricatures of contemporary individuals, news, sensational stories and issues of the day. The recently acquired Posada works consists of three examples of these popular broadsides. More 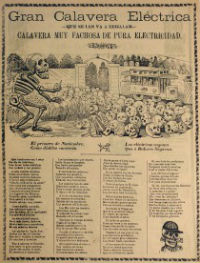